Last Sunday I played another game of Volley and Bayonet against Frank's British. We decided that we would be playing a fictional encounter somewhere in Spain around 1809. Both forces were equal in terms of morale and strength points per stand, giving both of us eight infantry stands, three artillery, and one heavy cavalry stand each. 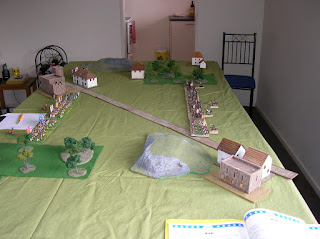 Since someone had to be the attacker, we used the ancient method of 'Paper, Rock, Scissors' to decide - as any gentleman would in such circumstances. As such my French were forced into the attack, with my 2nd Division boldly advancing towards Frank's line.with my cavalry in reserve.

Frank moved two of his divisions to counter my advance, one attacking on the French Division's left, the other on the right - supported by cavalry. The attack on the left was repelled while on the right a combined attack by Highlanders and cavalry smashed one of my brigades and disordered another. This victory on the right flank allowed Frank's cavalry to make a breakthrough attack which results in the elimination of another French brigade.


The 2nd Division became exhausted due to the casualties it had taken, it then suffered a morale collapse. This meant that half of my force was no longer effective... I also had to deal with a small cavalry problem my rear.
While in theory my charging the flack of a disordered British cavalry unit with a nice fresh French one should have hammered the British unit, my appalling dice rolling coupled with Frank's jammy dice rolling gave victory in this clash to the British.

Once my 2nd division had broken, Frank outnumbered me two to one - odds he was very keen to use. That was the point at which I decided that if I stayed I was going to lose both divisions, but if I withdrew I could save what remained of my force.


The game was a very quick one in which the French suffered 4000 odd losses (Killed, Wounded, and Missing), compared to the British losses of 1000 (Killed, Wounded, and Missing).  This took only three turns to resolve (assuming that a turn consists of an attacker, then defender phase) which is meant to represent three hours of 'real' time. We also diced to see if Frank had managed to capture an Eagle from one of the two French stands he eliminated - and he turned out he had!

The conclusion we both reached after this game was that our forces needed to be bigger, especially if one force was having to attack a defending force. by having my attack fail, I lost half my force in one go. Still an enjoyable game, and we both learnt some more about V&B.