One of the CP scenarios that I have wanted to run for a number of years now, has been the Battle of Goose Green. I have been quietly acquiring the bits and pieces needed to run it. So far I have the British forces - bar the Harrier air support - all painted (bar the final basing), and with the Matchbox NATO Paratroopers set being reissued this year I should be able to produce the Argentinean forces by using these and figures from other sets.

But the most elusive item has been finding Pucara ground attack aircraft. Originally I was going to try and find a 1/72 scale model, but since I have moved to 1/144 scale for modern fixed wing aircraft I have opted to use a model produced by 3D printing.

I ordered them here from Shapeways - a site that contains quite a great deal of interesting items for gamers. I am sure that i will be purchasing more items from them in the future.

I also decided to purchase some ships to add into my existing 1/1800 scale fleet. I decided that this time I would get ships and boats that would increase the amphibious capability of my US fleet.


I don't think my photos give justice to the detail of these models, nor how hardy the material they are printed out of actually is.

Once I get these painted up I will post pictures of my current USN fleet.

Of course, if I am getting LCIs, I had to get some LCVPs too. These are also a very nice clean and crisp model. In fact, none of the Shapeways products had any imperfections as a result of manufacture that I noticed. I guess 3D printing eliminates flash and  lines!

I am very happy with my purchases from Shapeways and will be looking to put them up on the tabletop soon.
Posted by Uncle Brian at 23:07 9 comments:

Since I have finally managed to finish a technical that I started some time ago in the distant past, I figured I should post the finished product here, along with some other bits and pieces that I have been working on.


I also gave the finishing touches - a driver and a brown wash - to another diecast. This time it was a Matchbox Field Car that had survived from my childhood - although it had taken a few hard knocks in the process.

The next diecast repaint was a Jada Toys Battle Rig from their Battle Machines line. I bought this in a Walmart sometime in 2008 thinking that I could use it in a game of Dark Future, but I am tempted to use it as technical gun truck in either AK-47 or CD 3. Of course, I would have to field a force that matches it in all its silliness glory....

I gave it the usual treatment of disassembly, undercoating with primer, repainting, assembly and then a wash. However I did add a gunner to the main armament as it looked somewhat empty.


And last of all some Johnny Lightning Humvees that I purchased second hand in around 2007. One was from the Military Muscle range of vehicles, while the other was a civilian Hummer H1. They were badly painted so I disassembled them, put them in Simple Green, and finally many years later have undercoated them with grey spray primer.

The Johnny Lightning Humvees are meant to be 1/64 scale, but they size up fairly well to both my 1/72 scale Dragon premades, and my Matchbox diecasts, so I think this could be another example of the stated scale not always being correct. I should probably do a post comparing diecast Humvees at some stage....
Posted by Uncle Brian at 00:06 11 comments:

As promised in the last post here are some more pictures from the game Frank and I had the other day. 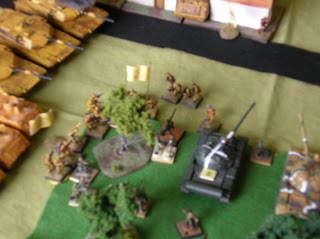 Many weeks ago Frank and I decided to have a game. I wanted this game to be a test of some of the different rules options we have for gaming with aircraft under Command Decision rules. The only official CD complete moderns set is Combined  Arms (CA), and while we have used its methods to fudge out stuff in moderns CD games, it really isn't up to the task. CD 2 does provide rules for moderns, but it lacks the data sets required to make them work.


The vehicle for this rules testing was going to be a rather target rich scenario that would pitch a GDI Mechanised Infantry Battalion - reinforced by two tank companies, and lots of air support and off board artillery, take on a range of Khandist and Noddist troops and equipment.

All Frank's GDI had to do was wade into the meat grinder and start dealing out pain. This is the point where the first of my assumptions came undone, although I didn't know it at the time. The assumption in question was that Frank knew what everything in the US CA TOEs was, what it did, and how to use it under the rules. In actual fact, Frank did not, and was thus _very_ hamstrung in the scenario due to him not being able to use his off table artillery in the most effective manner. The GDI airpower was able to fill the void, but not in the same happy way artillery can resolve situations.

However, this did lead to a number of post game revelations and discussions that has lead to work on a CD Moderns airpower handbook - consisting of Moderns stats for aircraft, their ordnance, countermeasures, and SAMs, and also for Frank's agreement in using the CD 2 Aircraft, and Anti Aircraft rules. The data set for these rules have been adapted from Harpoon.


The game itself was interesting, but hampered by the lack of smooth rules to handle airpower. Fortunately it has provided some nice pictures of Frank's GDI forces.