A number of weeks ago I had the opportunity to have a small pick up game. Volley and Bayonet was agreed as being the system, and I decided to run a battle between two neighbouring fictional 18th Century nations.

The first nation is a recently established republic, which has recently been the scene of a great deal of turmoil. The old established order has been violently cast down, great estates split up as part of a program of land reform, and the nation militarised under the axiom "All political power stems from the barrel of a musket"

GRAND ARMY OF THE REPUBLIC

The second nation is still organised along traditional lines and is a Grand Duchy which is nominally part of a loose confederation of states that in theory form an empire. In practice the Grand Duchy runs all its own affairs according the whims of the current Grand Duke.


ARMY OF THE GRAND DUCHY


The Grand Duchy has, like its neighbor the Republic, recently experienced a number of poor harvests. Food, or rather the lack of it, provides the source of the quarrel that has occasioned this conflict. The Republic's recent agricultural polices has left it rather vulnerable to poor harvests, and with masses of hungry citizens requiring food, it feels it has little recourse to seize what it needs from its neighbours as they have been less than forth coming with supplies.
The Grand Duke feels that what little surplus the Duchy has produced is best kept in the Duchy as a hedge against yet another poor harvest. Astute readers will note that both Orbats above lack cavalry. The sad matter is that neither nation has the required amount of grain to feed the large amounts of cavalry mounts required to support that arm. (Which is rather convenient as I haven't painted any 18th Century cavalry units yet...)

The game started with R. deciding to be the attacker, this meant that he was going to have to try and seize all the urban areas on the board (in order to seize whatever food stuffs were present). The more he controlled, the greater the Republic's victory.


By default I became the defender. I had one job. Protect the towns and villages on the table and thus save the grain for the locals!

The small tabletop meant the forces would get into action quickly. The Republic could enter its forces from within 6 inches of any road enter point near the following settlements ; Red Roof, Four Points, and South Keep. The Duchy could choose to garrison any settlement using map deployment.

This meant fighting began early in the township of Four Points as the Left Wing of the Ducal Army was holding the town preventing the Right Wing of the Republican Army from seizing it the first turn. The fighting at Four Points would be bloody.

The rapid Republican advance meant that both wings of their army were able to bear on Four Points. Baron Lunn keep the Right Wing of the Ducal Army out of the fray for several turns. During this time the Ducal Left Wing had fought its Republican opponents to exhaustion with heavy casualities on both sides. 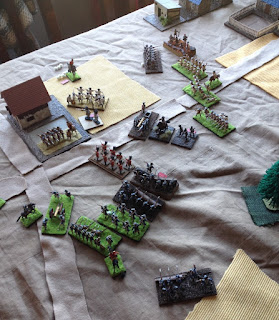 The Republicans had managed to destroy the bulk of the Dukes army level assets, and bring their other wing into play.

This allowed R. to put considerable pressure on the other wing of the Ducal Army. As the casualties mounted on both sides, it became a race to see which army would become exhausted first.

Once the Baron's wing became exhausted, it seemed prudent to ask for terms, and give R. the victory. As a result the Republic is able to seize the necessary supplies, and annex Red Roof, South Keep, and Four Points - thus gaining additional productive farmland!
Posted by Uncle Brian at 19:22 12 comments: