As promised in the last post, this one will feature an industrial themed BUA. The original plan was for this BUA to represent a nice red brick church, but having been playing a little bit of Total War: Empire lately, I decided to go with something else, something more industrial.

I also thought that having a nice cannon foundry on the table top would be a nice homage to RTS computer games that I have played over the years that have players stick factories down on the virtual battlefield.

I did some basic research on what 18th century factories and foundries looked like, and on the processes used to create cannon. Given the constraints of the 4 inch by 6 inch BUA template, and my desire to have a 3 inch by 3 inch lift off section, I tried to create something that gave the suggestion of a 18th century foundry, rather than a detailed model of one.

I still have a number of BUAs to finish for V&B, but I have also been working on making various teeth and tail elements for my 18th century forces. Hopefully I should have enough finished soon to be able to make a posting about them.
Posted by Uncle Brian at 21:08 8 comments:

Recently I finished work on another BUA for use in AWI Volley and Bayonet games. I decided to build one with a barn for the major building and put a drying shed (or corn crib) and some fencing on the rest of the base.


I went with a traditional red colour for the barn as when researching the colour of AWI gun carriages it had been suggested that red was a very common colour  available due to its use on barns. The other factor was than I wanted a structure that looked used and well maintained, rather than rundown and abandoned.

I used as the basis of my construction a Plasticville HO scale barn that I purchased second hand when I was in PA last year. I also managed to pick up a boxed set that I will probably make up straight from the box for use in ACW games.

A while back I decided that I needed a Panhard AML 90 (click here for details on on vehicle), and that I didn't want to track down a plastic kit or resin model of one. Rather I wanted to see if I could produce a suitable proxy from my bits bin.

I started with a rather play worn Corgi Daimler Dingo armoured car, which I roughly cut the sides down on.


I added an Airfix Sheridan turret, and added the barrel from a Roco Tiger II. I then added a figure from a Hawesaga kit to act as the vehicle commander.

This should serve as a suitable proxy until I decide to replace it with an actual model of an AML 90. Should I do that then this proxy model will be used in Harad games.


Given the way Command Decision treats vehicles (one model represents 3-5 actual vehicles) I shouldn't need more than one AML-90 for the Falklands, as their battlefield use was quite limited.


On an unrelated note I am currently looking for a rules system similar in approach to Megablitz, but for modern (read 1970s-1980s) forces. I had an idea that I could use such a system to fight the larger actions of Harad's civil war, and use CD for fighting the smaller ones.Should anyone have any suggestions, please leave them in the comments. Of course it may well be that Megablitz is perfect for what I want, in which case I then have to track a copy down!
Posted by Uncle Brian at 14:31 24 comments:

I had Obsidian Portal recommended as a planning tool for organizing my Harad campaign setting. I have had a quick play with it and it seems to do the job. Click here to see my efforts so far.

And now for a couple of pictures....

A while ago I took these pictures of  some of the terrain I have for use in Harad. I figured now was a good time to post them.
Posted by Uncle Brian at 03:41 8 comments:

Back in July of 2012 I made a post about some Matchbox toys that I would be repainting with a view for using them for gaming.(click here to see that post) I have just recently finished painting them.


My normal method of repainting die casts is to drill the rivets out, disassemble, and then spray the appropriate sections with grey primer. These had the added step in between the disassembly and priming stage of sitting in a box for a year and a half.


I still plan to use this beast to run some linked games loosely based on the premise of the novel "Juggernaut" (click here for more information on the novel) In CD terms the truck and trailer will be around half a mile long, so I intend to have it represent a small convoy of associated cargo and pilot vehicles.

The Matchbox MPCV is quite a nice die cast vehicle which has been produced to box scale. as such it is difficult to give a scale any closer than "Large HO' or "Looks workable". Various reviews on the internet have given it a variety of scales - the major commonality of the reviews has been that it is very usable for the reviewers preferred figure size-  be it 15mm or 20mm. Such is the joy of box scale!

All of these were dry bushed with Vallejo Dark Sand, and then given a brown wash. I just need to hunt through the plastic stash to find some suitable figures to create some engineer stands to go with them. I think  a suitable figure might be the one in the EOD suit from the "German Crisis Reaction Forces (KRK)" set by Revel (click here for the PSR review)

Now I have to get back to making buildings!
Posted by Uncle Brian at 00:14 12 comments:

Currently I am working on rationalising my collection of wargaming buildings. This involves me building new ones, rebasing and/or repairing old ones, and sadly having to deep six items that are too damaged. So far it has proved to be an interesting and positive experience.

The Airfix Waterloo Farm building have been used by me for all manner of buildings over the years, but I had never gotten around to basing them once i had painted them. So I touched up the paint job, gave it a lick of brown wash, put it on a base, and added some stick down paving for the courtyard.

Naturally the complex is much larger than a single BUA template in Volley and Bayonet, (it's about 3 and 3/4 times bigger) but the court yard isn't able to hold the 3 plus brigade stands (or 6+ regiment stands that it should hold under the rules. However, I will figure something out.
.


The main thing is that I have a rather nice terrain piece that is going to survive better now that it has a base. Plus for CD purposes, there is no issue at all! 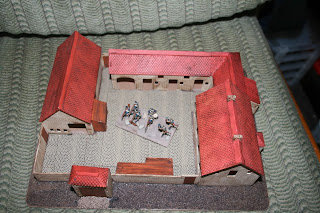 Of course now I need to track down a set of the Waterloo Accessories (click here to see them over at PSR) so I can have some nice farm wagons to go with it!
Posted by Uncle Brian at 17:31 12 comments:

2014 has well and truly arrived in New Zealand and I have already started making wargaming purchases, planning future games, and working on finishing some current projects. Particularly ones that could be used to add value to other projects...


A few years back I discovered some cheap toy pirate ships for sale, so I bought five of them with the idea of painting them up and using them for gaming. A friend of mine has a rather large lounge with blue carpet and the idea was to use them for a type of naval floor war game. Like a great deal of projects, this one has languished for a number of years before I recently got inspired to relook at pirate stuff after seeing my friend Ken's 15mm collection of pirate stuff.


Having acquired a couple more ships (more on that later) I have enough ships to put to sea two small fleets. All I need to do is a little prep work - removing stickers and blogging some holes - and then I can paint them and use them.


The paint job will be fairly basic, but hopefully quantity will have a quality of its own! Plus once I finish the fleet I can use it for gaming, rather than have it sit in a box waiting to be used. After all, why have toys if you don't play with them!