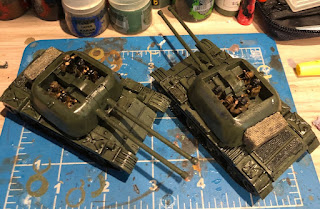 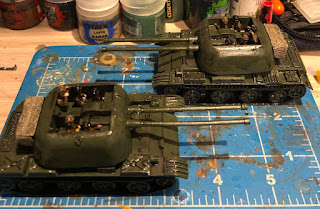 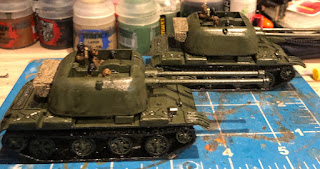 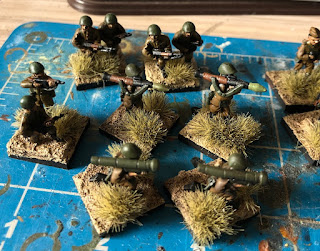 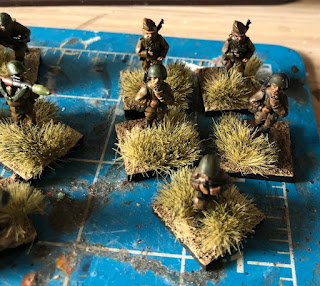 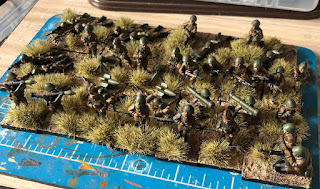 I am currently attempting to finish a number of unfinished projects that are overdue for completion. This weekends effort was finishing off some WW2 Soviet Anti Tank Rifles (ATRs) of which some had been lurking around uncompleted since at least 1999 - if not even earlier!

I have started using larger bases than the standard Command Decision base for some prone figures and support weapons - particularly where the figures the protection a larger base can provide.

One of the figures on the right hand stand is a scaled down clone of an Airfix 1/32 scale Russian. I have a number of these Hong Kong produced figures spread throughout my Soviet forces.

Since I was already doing some ART stands I figured I could paint up some metal figures of unknown manufacture that I acquired in the early 2000s but had done nothing with. I had enough to make four ATR stands - each equipped with a PTRS-41.
I hope to be able to integrate these stands into both WW2 Soviet and postwar Soviet/Russian equipped forces as either ATR stands or as Anti-Materiel Rifle (AMR) stands. Post WW2 both the PTRS-41 and PTRD-41 ATRs have seen service, with the most recent use being in the current conflict in the Ukraine as an AMR (click here for more information). Given that, it would also seem very likely that they would be used in that way by various forces in Twilight 2000.
Posted by Uncle Brian at 19:17 2 comments:

3D Printing Round Up

Late last year I was fortunate to receive as a late Christmas gift a 3D printer. Since then I  hae been experimenting with it to produce models and terrain pieces. Most of what I have printed, I haven't taken photos of and as a result it hasn't made it on to the blog.

As I don't know how to digitally model items in 3D, I am reliant on the hard work and talent of others. The files that I am using to print are sourced from:
I suspect that the vast bulk of people using 3D printers to produce gaming aids are reliant on the efforts of others to produce the files they print. Hopefully this potential market means that folk who create files find it worthwhile to continue doing so.


My 3D printer uses filament so doesn't produce models with the same crispness as a resin printer. I am planning to obtain a resin printer in the future in order to produce more detailed models and figures.

As I intend to post more on this blog there will be more 3D printe items in the future.
Posted by Uncle Brian at 15:33 6 comments:

I have completed another brigade stand for Volley and Bayonet, but unlike my more recent efforts - it has nothing to do with the 100 Days campaign. Instead it is a Polish infantry regiment from the army of the Duchy of Warsaw.

In late 1809 the Duchy of Warsaw added another six infantry regiments to their army. One of these regiments was uniformed with captured Austrian uniforms which resulted in them wearing white coats with white lapels, light blue collars and cuffs topped off with a czapka. More information on Polish troops during the Napoleonic period can be found here.

This produced a uniform that is in my opinion quite pleasing to the eye. So when some painted examples came up for sale on a local internet auction site I asked Kat to to put a bid in for me. The figures are all from the Waterloo 1815 Polish Infantry 1812/14 set (click here for the PSR review).

Only four each of the standing firing pose and the reloading pose is supplied in each set according to PSR, so this group of figures has been collected from three separate sets.

The figures were individually based which required me to unbase them carefully in order to rebase them in a pleasing manner for V&B. The unbasing process did damage the paint job slightly on some figures, and the ramrods were painted as wood rather than iron, so some minor repainting was required.

The flag had also been painted as blue with a golden eagle, so I repainted it to more closely match what most secondary sources have described the flag. Once the touch ups had been completed I used a very light black wash to pop the detail in the figures.

As a quick break from my 100 Days Napoleonic project, I decided to finish off a project that I started last year - namely completing painting up figures for "Children of the Tattered King" a Hastur cult for In Her Majesty's Name (IHMN). My previous post dealing with these cultists is located here, and it in I hinted at my idea of using GW Night Goblins as Tcho-Tcho cultists.

Naturally this would mean yellow would feature heavily in the paint scheme:) The fleshtone was a nice pale clay colour, with a heavy brown wash appliedd in an effort to tone down the yellow and make everything look dirty.
While the Tcho-Tcho don't feature in the background material provided in IHMN, the nature of the background doesn't preclude the introduction of elements of the Cthulhu Mythos (click here for a basic primer on the Mythos). Indeed, IHMN is flexible enough to accommodate material from a variety of sources.
The intent is to use these figures against both 28mm and 20mm forces. In 28mm the figures will use a Hastur cult flavoured Pygmy list with the Tcho-Tcho being the bulk of the force using Pygmy stats, while in 20mm I am making a custom list where the figures will represent the more robust purpose bred combat monsters that some backgrounds have the Tcho-Tcho breed for war. Naturally the 20mm list will largely consist of the cheaper, and more expendable, human cultists detailed in the previous IHMN post.
The internet is full of different interpretations of how Tcho-Tcho can be dealt with in games, and how they can be used in a manner that doesn't rely on the usual tropes.  A nice discussion on this can be found here, and here. It should be noted that the only certainties regarding the Tcho-Tcho is that they seem to originate from Leng, are non-human (but may have interbred with humans at some stage), and when ever and where ever they manage to establish settlements on Earth, they are feared and despised by their neighbours.
Of course this raises the possibility of Tcho-Tcho communities across the world, each with their own distinct culture that has resulted from interacting with human neighbours, while still maintaining a core set of cultural characteristics that are uniquely Tcho-Tcho.

The more I look into this, the reater the possibility of me grabbing a copy of Delta Green, GDW's Dark Conspiracy RPG, and seeing if I can get something suitable worked out for a nice game of Stryker.