Recently I refurbished some more Airfix British Grenadiers figures into stands for use with Duke, Elector, King. (Previous posts relating to this can be found here and here)

The majority of the figures are blue coated, so currently there is a distinct imbalance towards blue coated troops with fur hats. Once I finish the recycling of the previously painted figures, I will start painting white,yellow, and red coated figures.

Once these are completed I will start looking at my unpainted figures and figuring out what figures I can use for cavalry, artillery, militia, and regular infantry.
Posted by Uncle Brian at 13:30 2 comments: 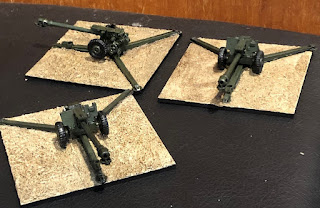 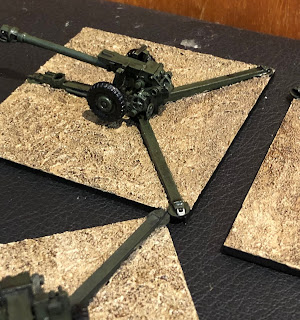 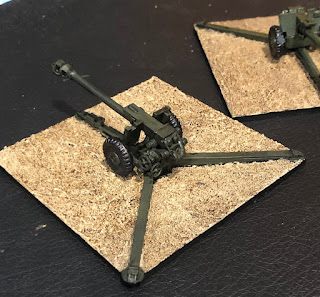 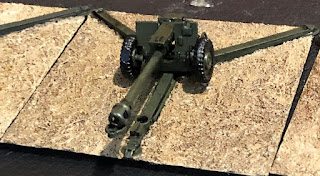 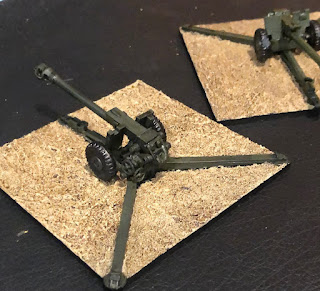 As a slow burner project I have been creating small groups of figures for use in games of In Her Majesty's Name (IHMN). One of the forces that I have recently created is a group of monks loosely based around the Dread Monk list in one of the IHMN supplements.

The rank and file monks are from Red Box Set 72086 Russian War Monks (click here for the PSR review). The Abbot (centre wearing the skull mask) is from Caesar Miniatures Fantasy set 103 - Undead (click here for the PSR review) and seems to have a suitable air of authority.
The war monk figures could also work as cultists (click here and here for my IHMN Cultists), but the Dread Monk list offers a different range of challenges to the cultist list. Besides, having both forces allows the possibility of having scenarios that pit Dread Monks versus Cultists!


In addition to the monks I decided to base up a couple of mummies that I had lurking around, as I figured that they might prove useful at some stage. Additionally I hope to be able to use them with The Silver Bayonet. 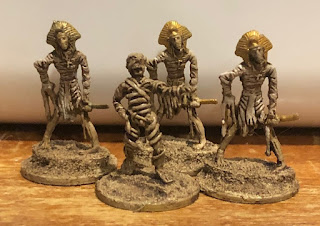 The three plastic Mummies in the rear of the picture are from the set of pieces provided for the Egyptian faction in the Eagle Games board game  Age of Mythology (click here for further information from PSR), while the mummy without headgear is a metal figure from Elhiem Figures.

I have been over the past two years slowly painting and basing figures for use with "In Her Majesty's Name" (IHMN). Even slower than this process has been my updating of this blog with that progress.

IHMN is very flexible in its approach to creating teams of adventuring bands for use in the game. One of the supplements for the first edition of the game "Sleeping Dragon, Rising Sun" (SDRS) provides a basic list for a group recruited from the Japanese Army.

I did consider using the Red Box Japanese Infantry from their Boxer Rebellion range (PSR Review here), but I was rather unimpressed with the figures. instead I opted for using the metal Japanese Infantry from Stan Johansen Miniatures' Boxer Rebellion range (click here for more details).
The Japanese lists in SDRS offer a number of possibilities for adventuring groups that allow a nice mix of traditional elements, modern elements (products of the Meiji restoration), and weird 19th century mad science elements. I am already starting on some steam powered walkers to supplement this Japanese force.
IHMN also allows for the addition of Sumo Wrestlers to some of the Japanese lists, so I thought that these painted old Grenadier 25mm Sumo Wrestlers would be a prefect addition to the force mix.

I also think that the size difference between the 20mm Infantry figures and the 25mm Sumo Wrestlers helps create the fell that these wrestlers are at the top end of the human size spectrum - even to the point of being the beneficiaries of  cutting edge scientific discoveries from the University of Toyko that have surpassed the efforts of Dr Jekyll's original formula.

As a means of avoiding painting up more figures for my V&B 100 Days Campaign, I have continued to produce V&B stands for use with Duke, Elector, King (DEK).

The figures used are primarily from the Airfix British Grenadiers set (PSR review here). The blue coated ones had previously been painted in an attempt to represent grenadiers from Napoleon's Imperial Guard. The quality of the paint conversions ranged from bad to ok in quality, so I decided to repaint them as generic 18th Century Fusiliers with blue coats and a variety of facing colours.

The process involved painting out detail such as splashes of red paint on the shoulders to represent epaulettes, repainting details such as white belts, and touching up missing paint from coats, muskets and bearskin hats.


I also took the opportunity to base up some skirmish stands in order to use up painted figures that I hadn't been able to justify using on regimental stands as either they were left overs from creating a previous stand, or to use them would require me to paint additional figures in the same paint scheme


The first of these skirmish stands has been painted and based in a similar style to the first of the fusilier stands above. The prone musketeer is from the Airfix Washington's Army set, while the kneeling rifleman is from the Atlantic Davey Crockett set (PSR review here).

The second stand consisted of to figures that I painted up, but didn't use in the production of my first stand for DEK (click here for details). It also gave me the opportunity to use more of the autumn leave flock that I like!

The third skirmish stand consists of three of the Airfix British Grenadier figures painted with forest green coats and trousers with green facings.  The webbing and pouches have all been painted black. The paint job on these three figures had largely flaked off so it had to be entirely redone.
The green coats and trousers, coupled with the black leather equipment, makes me think of British Riflemen of the Napoleonic Wars. I suspect that AWI British Legion units may also have been an source of inspiration for the original painter.

The final group of figures painted and based up is the last of my Lucky Products Hessians that I started painting back in 2013. The first group I painted up as Grenadiers of the Hesse-Cassel Regiment Von Rall (click here for details).
This group I decided to paint up in a similar style but without the stripped mattress ticking breeches of the previous group. I did decide to paint the drummer in reverse colours though. While Hessian troops of the AWI didn't have their musicians in reversed colours, I felt that it would be quite pleasing for an imagi-nation force.
If I ever get more of the Lucky Products Hessians I would be tempted to paint them as 18th Century Persian or other eastern, troops as the mitre of the Lucky Products figures would lend itself to a paint conversion to other similar conical headgear.

I still have some additional stands to repaint - both blue and green coated regiments - and once they are completed I can start work on painting tricorn infantry stands.
Posted by Uncle Brian at 00:08 5 comments:

Recently I have been reading on other blogs (such as Neil Patterson's Aufklarungsabteilung, and David in Suffolk's The Ragged Soldier blogs) about using a Frank Chadwick designed board game called 'Soldier King' as a campaign engine for tabletop games for battles between 18th century imagi-nations. While both blogs contain useful information with regard to the use of 'Soldier King' as a campaign engine, Aufklarungsabteilung has more detail with regard to using it with Volley and Bayonet.
In the comments on the Ragged Soldier post, Neil mentions that rather than use 'Soldier King' as a campaign engine, Frank Chadwick's gaming group created ‘Duke, Elector, King’ a V&B campaign system that was designed to fight battles between 18th century imagi-nations (more details can be found here).
I have painted and based these Airfix British Grenadiers for use in ‘Duke, Elector, King’ despite not having determined what nation they will serve. The paint scheme was loosely inspired by the uniforms of Russian Grenadiers.

The use of Airfix figures has been inspired by the comment made by Glenn some time back that with the release of the British Grenadiers set (PSR review located here) and the Washington's Army set (PSR review located here), Airfix had provided Wargamers with two very useful sets of generic 18th century infantry.As I have been fortunate enough to acquire a number of figures from these sets from Glenn, using them as the basis for several imagi-nation armies would seem to be a logical employment of them.

I also have a number of painted and partially painted paint conversions of Airfix AWI British Grenadiers into French Napoleonic Imperial Guard Grenadiers that I obtained from Glenn. These figures I hope to be able to convert back into 18th century troops in blue coats for use by another yet to be named imagi-nation.
Posted by Uncle Brian at 01:32 12 comments: