Turn 4. I manage to reorganise my surviving armour, by disengaging one platoon back into the woods, swinging another round into a firing position to guard against an advance on the left flank, and moving back into the woods with the remaining T-34/85s. Frank dismounts his mech infantry, and seizes the remaining hill. Nod now controls the high ground on the board.


The BDRM fires a Spandrel and destroys one of my T-34/85s as it advances into the woods. I return the favour by using a TOW stand to destroy the BDRM.


The other TOW damages a T-55 putting it on red, forcing it back, while my T-62 fails to damage the T-55 it is shooting at. Poor shooting is not limited to just the Bosniaks - a battery of Nod twin 23mm guns opens up on my infantry on the edge of the woods for no effect. The Noddist T-55s open up on the infantry and TOW stand, destroying the TOW stand and chewing up the Bosniak infantry. In return, the infantry brew up a Nod recon buggy that advanced into effective range. Frank uses his 120mm mortar on the other TOW stand for no effect, but one of my infantry infantry companies pin in the morale phase.


Turn 5. Frank advances his T-55s, and his infantry on the hill shoots at the TOW stand. The TOW engages and fails to damage a T-55, and the T-62 fails to hit the other T-55 in the opportunity phase. In the general fire phase, Frank finally gets artillery to conduct a mission, pummeling Bosniak infantry advancing in open towards the woods on the right. 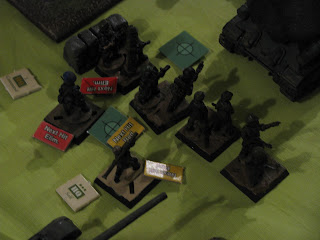 
At this point I decided to call the game, as we had been going for around 4-5 hours, which was the allotted time frame for the game. Frank's forces had advanced further along the board than I had, but were not in a position to advance further.  I had abandoned ideas of advancing some time ago, as I simply didn't have the numbers to advance in the face of Frank's artillery (battery of 120mm mortars, and a battery of 122mm SPGs), or his virtually unscathed infantry forces.That being said, Frank was very reluctant to attempt a further advance down the road in trhe face of my surviving armour. As such, I viewed the situation as being a marginal Nod victory.

The BDRM-2 with its Spandrels had been an unpleasant surprise for me, and the rapacity of advance by Frank's mech infantry is always troublesome. My lack of artillery support in these games is an area that I am working on, as it is artillery that seems to save Frank's bacon in most games. Still, a very enjoyable game, that has left me pondering a number of points.
Posted by Uncle Brian at 18:37