Currently I am avoiding doing work by playing on the computer. Part of this current process of procrastination involves making postings to the blog.
And I came across a series of photos taken of a CD3 Moderns game set in my gaming groups setting of Harad. Harad is a fictional country which  has the misfortune to be fought over by multiple factions. This tends to lower real estate values. The campaign incorporates elements of the game Command and Conquer. 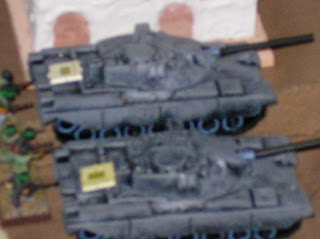 A blurry photo of two CD platoons of Chieftain tanks on the advance supported by a company of local miltia. The tanks are plastic Hong Kong knockoffs of the Matchbox BattleKing's Chieftain. This helps explain the dodgy running gear. Chieftains are a popular choice in Harad, these examples being used by a faction of the Brotherhood of Nod.
In CD urban areas are represented by templates, and typically the model on the template reflects the main or most important building in that urban area - in this case the Mosque. Note to the right an understrength battalion prepares to move in the Mosque to safeguard its cultural treasures for all Harad.
Another urban template, this one represents part of the commercial district. The most notable feature is of course the world famous 'Cafe Dirka Dirka'


All in all a very pleasant game was had. Some of these photos have been previous posted on Faceblog.
Posted by Uncle Brian at 22:01

Email ThisBlogThis!Share to TwitterShare to FacebookShare to Pinterest
Labels: Harad